Today, my TNT buddy Lily and I went out to the Marin Century (100 mile) bike race to help staff the Team in Training hosted food table. It was really amazing. They had warned us that bike races are NOTHING like running races (where you run past for a cup of water or Gaterade and maybe a package of Gu) and they were right! One of the cyclists called it the Four Seasons of rest stops – we had three giant tables loaded with every kind of fruit imaginable (oranges, bananas, grapes, figs, dates, watermelon, peaches, nectarines, cherries), sweet treats (M & Ms, cookies, Nutella), salty treats (boiled potatoes with salt shakers- they were a huge hit! as were potatoes slathered in Nutella), peanut butter & jelly sandwiches, hotdogs, Ramen noodles and tons more. It was insane!

The cyclists were on their 75th or so mile when they got to us. (Whaaat????????) It was interesting that they rolled in, came up to the table looking not very tired or in pain, and chatted and sat around for like half an hour before getting up and going again. That was pretty interesting. Of course one guy rode past on his bike and grabbed a potato to go, but most people seemed to take a very leisurely rest. It was kind of fascinating. 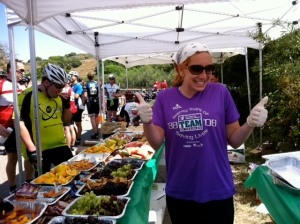 This race also seemed to be 75-80% men, especially the first half that came in. At first I actually thought it was a men’s race. An OLDER men’s race. There were some women, but they were definitely in the minority. Especially younger women. Which was also really interesting. Some of the riders were going to do a DOUBLE, ie 200 miles! YOW!

Anyway, I sliced watermelon and cut up PB and J and opened endless packs of cookies and got to chat with other TNT folks who were doing other events, mostly the Nike Marathon. One triathlete is doing the Alcatraz Tri in a couple weeks (yikes).

It was fun to get out there and see what other people are doing. And we got some nice fundraising credit from TNT for being there (niiiice).

After our four hour shift we did our run workout for the day, which was a 30 minute easy run. It was not very easy for me. I had gone to my trainer yesterday and we did a core/strength workout that involved a TON of squats and lunges. My hamstrings were freaking killing me and felt like they were made of thick, tight rubber bands. I could barely run, for real. 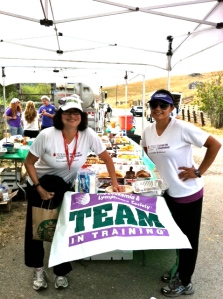 Tomorrow is a whole team swim workout followed by our first bike clinic and team bike ride. I am nervous and excited. THEN I am going to buzz over to San Francisco to perform “FoodFoodBodyBody” in the San Francisco Theater Festival. I sure am going to sleep well tomorrow night….!