I’m excited that Tracey (aka TJ) is sharing one of her awesome healthy recipes on my blog today! Her blog is full of fantastic, easy recipes that are super WW-friendly. Check out her fantastic progress – inspiring isn’t it?? One of her greatest strategies is coming up with wonderful recipes to keep her satisfied and on track. Take it away, Tracey!
——————–
Hi guys! Tracey here from tj’s test kitchen! Special thanks to Foodie McBody for allowing me to post a recipe over here today. 🙂 I made this just this past weekend with my Mom and the whole family loved it. Beef Stroganoff SCREAMS comfort food if you ask me but sometimes with comfort comes calories. My mission along this weight loss journey is to make the foods I love…. HEALTHIER!

In separate pan- even at the same time the beef is cooking saute mushrooms in a small pan sprayed with PAM.

Ingredients all lined up….

These are the noodles I used 1 cup for 5 PointsPlus 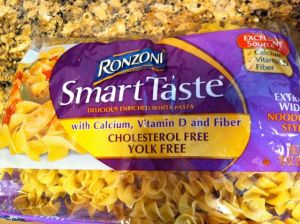 After draining any fat, add onion soup mix, sour cream, water, and both soups to the pan. This looks weird, I know, but wait! haha!

Give it a stir….then toss in the cooked mushrooms. 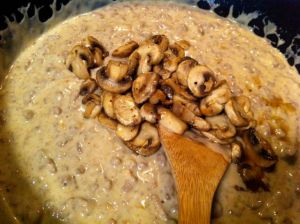 stir again…mmmm nice and creamy! Add in pepper if you like! 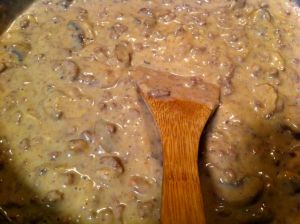 Serve on top of cooked noodles. YUM! After I took this picture I tossed in some peas. It was delicious!

Easy and tasty! My two favorite words to hear when I am cooking dinner! Hope you all liked my recipe! Make sure you stop by my blog to let me know if you decided to make it! I would love to hear all about it! 🙂 ENJOY!  tj
April 12, 2011 3 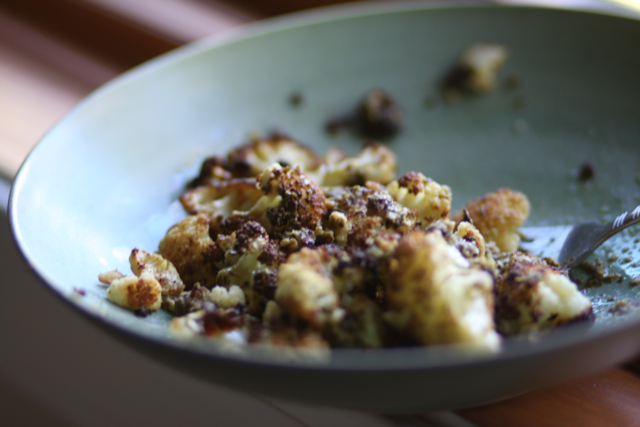 One of the great things about leading WW meetings is that I have to pay attention to all these elements of the program that are really, really helpful. This morning I said something along the lines of finding new foods or new ways of enjoying old foods, to keep things “fresh.”

I’m still sort of on the sick side. I’ve got pretty low energy and a sore throat. Yesterday I was surprised at how much I felt like eating. I wanted real comfort food, like mashed potatoes and pudding. Baby food.  I realized that if I keep going too long like this, without exercising, soon I’m going to be in trouble.

So on the way home from the meeting I stopped at the Farmers Market. I spotted a cauliflower. I didn’t really think about it much. But I brought it home, chopped it up and put it in the over (425) for half an hour. When the buzzer went off, it was crispy and browned, crunchy and yet soft on the inside. I mixed it with a little jarred pesto and put it in a big bowl. OH WOW. It was like… the best comfort food ever. I was so happy. And it happened spontaneously. This was one of the few things we discussed in today’s meeting and it felt so good to just implement it in a way that satisfied my need for comfort and yet is still really healthy.

The Wonderfulness of Somebody Else Cooking In My House

Last night our housemate (yes, we have a new housemate for several weeks!!!!) taught us how to make homemade gyoza, or potstickers. They were easy. They were healthy and awesomely delicious. It was wonderfully exciting. I admit I ate wayyy more than your standard “portion” because I was just so thrilled. Oh well.

I wish we could always have a housemate as awesome as this. The sound of vegetables being chopped in the kitchen, NOT BY ME, was such a revolutionary sound! Somebody else was cooking! It was incredible. I was so happy. 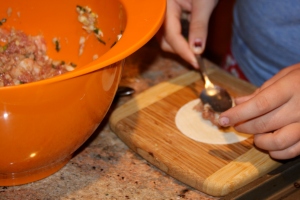 Want to know how to make beautiful and delicious gyoza? I just watched. But this is the basic idea of it:

Mix up all ingredients.  Put teaspoon? of mixture in half of wonton wrapper (they’re round). Seal with water and make a little pocket. Line up on tray. When you have a few dozen, put a little bit of oil in bottom of nonstick pan. Add gyoza and cook until they are browned on the bottom. Add a little bit of water and cover to steam cook the rest of the way. Probably takes about 5-8 minutes per batch. Eat. ENJOY! 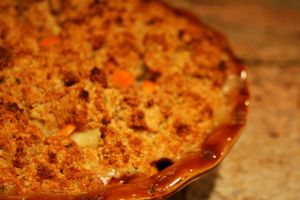 WOW have I had a culinary experience tonight. First, let me back up and say that a month or so ago, I was contacted by the authors of a new cookbook, Almost Meatless, to see if I’d like to cook, photo and blog about a recipe from the book for an “Almost Meatless Blogger Potluck.” This sounded like great fun to me, and I really liked the premise of the book (using meat as more of a condiment than a heavy main ingredient) They assigned me (after I’d chosen a few from their table of contents) to “Chicken Biscuit Pot Pie.” This sounded yummy. I LOVE chicken pot pie, and have forever. But it’s generally not been either WW- or-diabetes friendly (mostly due to the pie crust) so I’d been resigned to not eating much of it in my future. I jumped at the chance to get a healthier version.

Well. Let me say. This cooking experience was memorable!

FIRST let me say that for a working mom, this recipe is neither cheap, nor easy nor quick. It is NOT something to whip up on a week night when one does not have all manner of ingredients in one’s pantry.

I left work at 5:15 pm. Went to store. Ended up having to buy almost $70 of ingredients because I didn’t HAVE a lot of this stuff. Whole wheat pastry flour. Wheat bran. Bottle of white wine. Leeks. Parsnips.  Etc. Here are my groceries.

Got home at 6:15pm. Commenced cooking. Luckily, I had already bought several munchies which was a GOOD THING. The kids were not home. This was also a VERY GOOD THING. I had some friends coming over and they ended up being my very patient food-testing guinea pigs. Ditto, good thing.

I decided to follow the recipe as faithfully as possible, which I often don’t. But I wanted to be faithful to the original so I could give an honest assessment of both the process and the product.

It took me exactly TWO HOURS to make, start to finish. I had my mother chopping along as assistant. Without her, it could’ve been two and a half. Let me just say that was almost a deal breaker right there.

This could make a lovely, for-company, WEEKEND meal but no no no no no way could one sanely manage this on a school/work night. It was actually quite entertaining and laughable, and had there been offspring in the house, someone would have ordered pizza hours ago.

Anyway. I found the process not difficult, but VERY long. Very very long. It was an exercise in slow food. I kept thinking, this better be worth it. 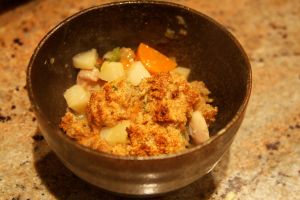 At 8:15, the timer went off (so did the smoke alarm, because it had bubbled over the top into the oven floor, causing a lot of smoke). I took pictures. I thought it was strikingly beautiful. We ladled it into bowls. There were 5 grownups in attendance. The comments were:

SO. I think the reviews (including my own) were generally VERY enthusiastic, but overall, this was all overshadowed by the insane amount of time and work that went into producing this dish.

When I make Chicken Pot Pie for my family, it’s five minutes of prep and five ingredients: a rotisserie chicken, Pillsbury pie crust, a bag of frozen vegies and two cans of Healthy Choice cream of chicken soup. Voila. My family loves it. (I actually got this recipe from the WW site, I think) I KNOW my kids would not be wild about the Grownup Version. But I would definitely make it for company. I would definitely make a leisurely afternoon of preparing it.

But this cookbook was not advertised to be quick, easy OR cheap. Just healthier, and delicious, which it delivered on in both areas.

Have a few hours to kill and a desire for some yummy healthy food? Recipe below the break!! END_OF_DOCUMENT_TOKEN_TO_BE_REPLACED

Here’s my first recipe!!  Some folks on Twitter were discussing kale today, and it reminded me of my friend Ericka Lutz’s awesomely delicous kale salad that she made for us one night. I used to be kind of kale-o-phobic, but this turned me into a true, true believer!

NOTE: It has to be the kind of kale that looks like this.

This is adapted from a recipe I found in the New York Times. We sometimes get a CSA box — this is AMAZING with the Dino Kale (otherwise known as Black Kale, or Lacinto Kale or Tuscan Kale).  Don’t try it with other kinds of kale, it will rip your guts out.  THIS recipe will make you groan — in the GOOD way.