Yes, I was pretty cranky going into this race. I had originally registered to do the half marathon. I was feeling injured and tired of being injured. It was promising to be a really hot day. All of this was hard to shake in the week coming up to the race.  But a few days before, my fabulous co-worker/buddy Stacey texted me about the race packet pickup and expo. If there’s one thing I love, it’s race packet pickup. I don’t know why. I love the excitement and anticipation building. I love the expo and all the cool stuff that is being given away or sold. I kind of love it all.

It always helps to share these experiences with other people. Race packet pickup, especially with someone who has never done a race before, can be pretty darned fun. This was no exception. It was by far the smallest race expo I have ever been to (yes, the smallest. It was in a tent!) but it was also one of the best. It had a large percentage of chocolate booths including this one by OCHO (stands for Organic Chocolate and NO they are not a sponsor of mine but I’d love them to be- oh my goodness the deliciousness!).

The official race shirts this year were lime green and pretty sweet. I love the V-neck. But I also got to pick up a bonus See Jane Run SuperJane Ambassador shirt as well and that was nice tooooo. AND… a bunch of my terrific Weight Watchers Wednesday night meeting members had organized to get a special T-shirt made with all our names on the back. Island Girls! (because our meeting and the race is on an island! Alameda!) By that night I was in a total quandary about what to wear to the race. The tech shirt was the most comfortable and fit the best, but the SuperJane one was an honor and very special, AND the Island Girls one was, well…. EXTRA special.

My other running buddy Sofia texted me the night before to ask if I wanted to carpool to the race in the morning. You know what? It’s ALWAYS a good idea to carpool. Because it is so nice to arrive with someone, to share the buzz and specialness about getting up early to do this thing. It’s fun to  arrive to the race venue, watching other people walking that you know are also going to your same race.

Our meeting spot was the Extremely Conveniently Located home of one of my WW members who lives across the street from the park where the Start Line was. Everyone was wearing their pink Island Girls shirts, so I knew I had made the right choice.

Being with this group of women made me feel so happy. These are my peeps! The tropical looking gal in the grass skirt is Tammy, my meeting room receptionist and all around fabulous pal. She is the best staff person a WW leader could ever ask for. The BEST. She signed up at the last minute and it was so awesome to have her there with us. All of the people in this picture have lost between 25-100+ lbs and transformed their lives and health. They all lift me up, motivate and inspire me. For most of them, it was their very first organized race.

When everyone arrived we walked over to the park where they were doing warmups and the Half Marathoners were getting ready to start. At this point I was just feeling absolute relief that I was not going to be attempting any 13.1 mile run. Just YES this was the right decision. I was not hurting but I knew that 5k was going to be juuuuuuust right. Right before they took off, I spotted Stacey who was looking so ready and excited. Her first race, and it was a half marathon! Go girl. So proud of her!

Then I saw on Twitter that my pal Pubsgal was volunteering at the registration table. Poor gal had injured herself the night before but she still showed up to help out at the race (YAY). We got to hug and celebrate our 4 year meetaversary! (4 yrs ago at this very race)

Then the 5k crowd got ready to start. They had some nice signs up so it would start in waves (never did this in such a small race, other than triathlon swims, and it was LOVELY and smooth and… so smart). I put myself in the 12-15 mile group which I was expecting. My plan was that I would do what felt the most comfortable, whether that meant walking, walk-run intervals, or running. I thought I’d start out running slow and see how it felt. As it turned out, it felt just fine. This race is so sweet and relaxed and supportive. I just ran at my own nice pace. I wasn’t pushing and I wasn’t really totally taking it easy. It was perfect. It was hot though, so even at mile 1 I was glad to see that hydration station. I took a cup of each. The Gatorade was like 200% concentration though and undrinkable. Toss!

I don’t know. It seemed to go by really fast. It was totally flat (my favorite) and along the waterfront (beautiful) and it just felt friendly and great. One of the huuuuge unexpected highlights of the race was when someone came running up beside me and called out, “Is that Foodie McBody?!” I was like, “Um, yes…” It was a blog reader! Recognizing me!! (hiya Lynette!!!) She said she recognized the BACK OF MY HEAD from my blog. Whaaat? That completely blew me away and also made me laugh. What a fun moment. I also got TOTALLY excited when I saw someone wearing a bright green Fitbloggin‘ shirt. (which is coming up in a couple of weeks! YEEEEHHHHHAH!)

It’s an out-and-back course, so I got to pass most everyone I knew going the opposite direction either in front or in back. I just ran at my own pace. I was feeling pretty relaxed.

Then before I knew it I was near the finish and I heard my name – Sofia! who had finished before me. There’s nothing like hearing your name being called in the finish chute. It was so motivating for me. I pumped it up and sprinted through the end. (then of course had to walk around in circles a bit so I didn’t keel over) It was HOT. I had a cute little medal (THANK YOU SEE JANE RUN for giving bling to 5kers! It means the world especially to first timers!) 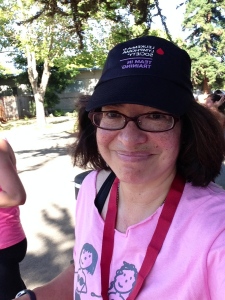 Then I got to cheer all the others coming in. I was screaming with excitement and feeling so proud of each and every one of them.

One of the best things about a SJR race is that they are so fantastically supportive AND they give you champagne and chocolate at the end. Sofia and I had a little photo op with the See’s Candy lady. Love that outfit. Can I work there? I want a bow tie like that.

I did a costume change into my See Jane Run Ambassador shirt, and met up with fellow SJR SuperJane and race buddy Christine. I love seeing her at races!

I thought it was going to take my coworker buddy Stacey around two and a half hours to finish the half. She told me she ran “slow.” But then I got a text from her at the two-hour mark and she was already in line getting her champagne! Speedy bunny! (sub-2 hour half/ What?!?!)

All in all, this race which I had been semi-dreading and kind of glum about, turned out to be one of the very best races ever. It reminded me that it’s not about distance or time.  It’s about community, and encouraging others, about being inspired and having fun.

After I checked my results, I was astounded to find that I had come within ONE SECOND of my PR for the 5k. Given all of my nontraining and injured state, that was pretty encouraging. Now I’m really excited about doing the See Jane Tri in October. My goal is to do the same – to have fun, to be active, to be part of an encouraging and supportive community. I’m soooo glad I did this race and so happy to be a Jane.

A few months ago, I was thrilled and honored to be nominated as a SuperJane, aka an ambassador for See Jane Run. This was such a fantastic thing for me, because I have loved and adored SJR ever since I ran in my second 5k back in 2009. There’s nothing more joyous and celebratory than getting a champagne flute and chocolate at the finish line of a race! (I also love SJR for awarding medals for a 5k race – THAT is so awesome and validating)

I was so excited to do my first SJR Half Marathon coming up this Saturday. But ever since March, my hip has been getting more and more zingy/painful. I think that I may be finally getting down to the bottom of what is causing this pain (should have final news by next week), but it has meant a serious curtailment of my training. This has been really disappointing.

I have finally had to come to grips with the fact that I’m either going to be doing the See Jane Run 5k verrry slowly this weekend (walk/jog), or I’m going to be a cheerleader. Which is prety cool in and of itself. There’s nothing like cheering on other runners, especially beginning runners. My second See Jane Run, last year, was also really special because I was able to run with my friend Mary, who was doing her very first race. This race is one of the friendliest, well organized and encouraging races for women of all abilities, speeds and sizes. Which is why I love them.

For the past few weeks I’ve been feeling kind of glum about not being able to do the half marathon like I had planned. I then spent a fair amount of time feeling like SJR had made a complete mistake in asking me to be, of all things, a “Super Jane.” But then I took a look at their manifesto and it brought a lump to my throat and smile to my face.

A bunch of members from my Weight Watchers meeting have gotten all excited about participating in the race this weekend. They’ve designed a group T-shirt and are all full of enthusiasm. For most of them, it is their first race. I am so happy for them and will be so thrilled to be at this event with them. It’s okay that I’m not running at my best pace. It’s okay that I’m not going to do the half marathon (this time). Some of them will be walking. I will  hang with them and have a rockin’ good time. This is what being a Jane is all about.

It will be a beautiful day. Bring on the bubbly and chocolate!