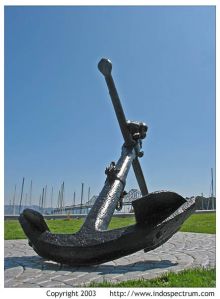 Finally – an old fashioned blog post that isn’t a race recap! How ’bout that! I’ve been so busy lately at my newish job – which I really like – but which requires so much paperwork that often at night I am catching up on doing that rather than blogging. I’ve missed it.

Anyway, today I was having an awesome run in the cool foggy woods (we are soooooo lucky to not be in the Heat Wave) and I was mulling over a couple of things (great things to do during a run). I ended up doing several kick-ass hill repeats, which made me feel so strong and happy. And I realized that part of the reason I was doing hill repeats is that last night when I went to see President Obama (!!!!!!!!!) I ended up running into two of my triathlon coaches, Holly and Mark. It was so great to see them. We were all pumped up for this fantastic event.

I think seeing them stayed with me a little bit this morning. So when I saw a hill coming up in front of me, I didn’t slow to a walk as I generally do. I charged UP the hills, especially the steepest ones. And it felt so good. And I felt like part of me had been sparked by seeing them last night, and remembering the hill repeats we did during training, and I wanted that feeling again. I often don’t push myself hard when I’m alone. But I felt “triggered” somehow – in a good way- to do this, thinking of the ways they had pushed me beyond my (perceived) limits.

At Weight Watchers, we often refer to the word “trigger” in a negative way; ie “trigger foods” are those that can start an avalanche of bingey or unhealthy eating. We eat one cracker with peanut butter and before we know it, the jar is gone, or we’ve then gone and eaten half the pantry along with it. Stuff like that. But in this case, I felt like I was “triggered” to do something positive, to do something MORE than I would’ve done without it. I felt kind of shot out of a cannon this morning. And I think it was a combination of things. I was still all high from seeing the President. I had been in contact with my triathlon training coaches. I remembered seeing the TNT Marathon team in the same park on Sunday, and this sign. 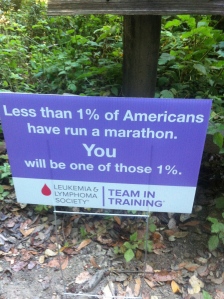 So that combination of “triggers” (as well as getting a text message from a running buddy this morning) all conspired to get me going, out the door, on the trail and not only on the trail but doing hill repeats. And it reminded me of how important it is to be part of a community that shares my healthy and active goals. It pops up and helps me in so many ways.

Another phrase we use at Weight Watchers is “anchors.” Anchors are positive reminders, people, thoughts or images that “anchor” or ground us and keep us from floating off-track or away from our goals. But I also thought about feeling an anchor as a heavy weight, sometimes dragging me down, keeping me stuck to couch or bed or routine.

Triggers and anchors. They can help us or hinder us both. What are yours?

Keeping It Fun: The Color Run

In keeping up with the “It’s gotta be fun or I don’t want to do it” theme, I signed up for the San Francisco Color Run (5k) last weekend. Another reason I loved this is that it was also a first-time race for my friend Sofia, who has joined TNT and is training for the Kauai Marathon AND the Nike Women’s Half Marathon. Yahooooo Sofia! She’s loving being part of the Team and I am so happy to have had a part in putting them together.

So she was very excited about all aspects of the run (ALL first runs should be this fun!), starting with the Packet Pickup a few days before.

The race itself was really silly and fun. For the weeks leading up to the race, I kept trying to figure out the course but all it said was a vague “Candlestick Park.” Like… we’re gonna run around Candlestick Park a bunch of times? Well, exactly. How funny was that. The premise of the Color Run is that you start out in all-white garb. At every kilometer (more or less) there are volunteers flinging colored powder (actually, cornstarch) all over you. By the end of the race you’re a big colorfull mess.

Fun, eh? I realized that I was actually being kind of conservative at the “color stops” and just letting stuff fall on me from the air rather than, you know, rolling around in it like some people did. It was silly and goofy and fun. It wasn’t timed, and I’d say it wasnt my best time because I slowed down quite a bit to take pictures and stuff during the color stops. But Sofia had a PR for her 5k and she SMASHED it. Very proud of her and glad she had such a fabulous first 5k! 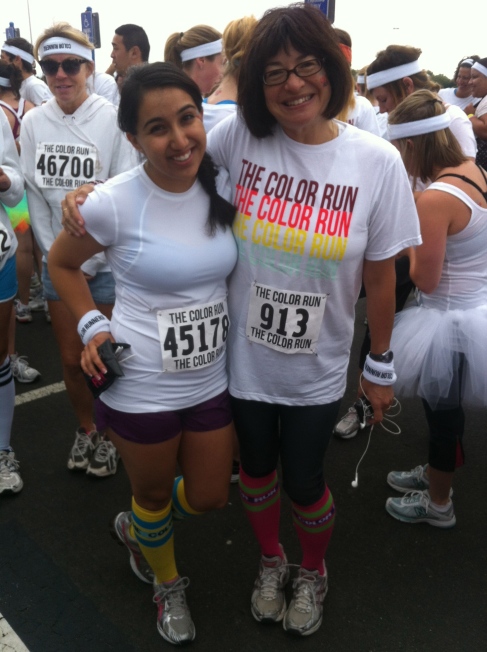 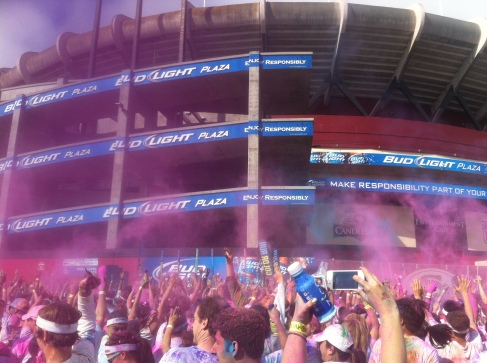 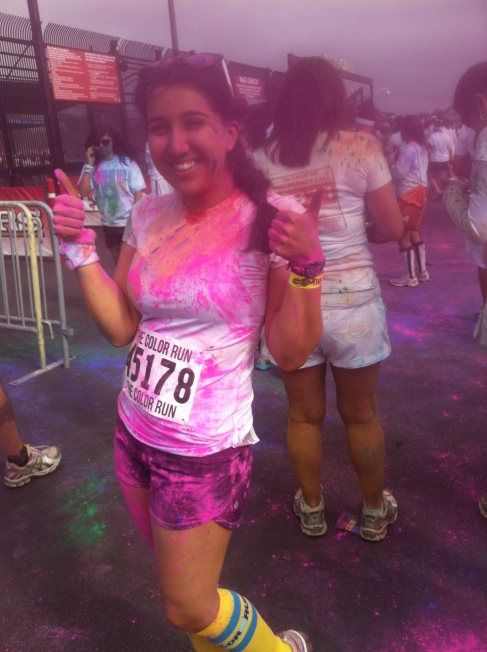