I had a very Foodie McBody weekend this last weekend. Mr. McBody and I took my mom down to LA to visit friends and relatives and to visit the awesome Japanese American Museum. The weather was absolutely amazing.

It was really interesting being in LA for so many reasons. From the minute we got to the airport, I was struck by the incredible number of (by my estimate) size zero-to-2 women around. I mean, I rarely see women this stick-thin where I live. But it felt like they were everywhere. Plus, incessant ads for 1-800-Get-Thin on the radio, on billboards, EVERYwhere. And cosmetic surgery. It was such a “Toto, you’re not in Kansas anymore” realization.

On the other hand, there was such a visible overall commitment to fitness as well. AND massive foodie-ness everywhere. So… double edged sword, I guess. Triple edged sword.

The McBody part: I went for an almost five mile run along the Palisades and the beach on Saturday. It was absolutely gorgeous. 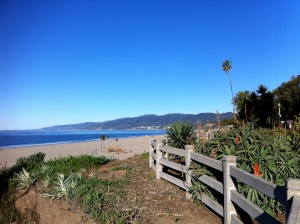 I had plenty of time, and I just told myself I was going to go as far as I wanted. I started out slow but after mile 2 (my magic moment) it started feeling really, really good. One of the great things was that I kept passing these “pods” of around 20-25 people, each running with a couple of coaches. LA Roadrunners, you guys are AWESOME! I must have seen a total of (no kidding) 500 people out there running that morning. At first, I saw lots of really fast teams but toward the end of my run, I saw this group out there that looked… like me! They were running like penguins. I got so excited because I could see their feet and they were moving at the same pace as mine. They were coming toward me and as they passed me, I turned around and ran behind them for a while. It was really fun, and a great aha! moment to think, there are training groups that go at my pace! I loved it.

On Sunday, I took a nice long walk along the same route. Beautiful.

But the HIGHLIGHT of my Sunday was a cooking class at Firenze Osteria, the restaurant of Top Chef‘s Fabio Viviani! Woo! I am such a HUGE fan of Top Chef and Fabio is one of the friendliest, Tweetiest chefs there is. And funny. AND an amazing chef. I was so excited to discover that he was going to be offering this class the same weekend that I was going to be in LA. YIPPEEE! I invited my young cousin-in-law’s fourteen year old son, who loves to cook, to come with me.

The “class” was actually a live demonstration in front of a restaurant full of highly amused people. Fabio is a great entertainer, warm and funny. He also really knows his stuff! He’s been cooking since he was a toddler. He’s been in restaurants his whole life. He told lots of affectionate stories about his grandmother and her handmade, old-country ways.

So the class was about how to make pasta in five minutes, which Fabio stretched out to about 45. But really it was shockingly simple. He quizzed us over and over: HOW many eggs if you are cooking for four people? “FOUR!” I was actually amazed at how easy he made it look. Then we got to taste it. Wow. It was so, so, so delicious. With this crazy delicious Bolognese sauce. Immediately people started clamoring for a “sauce class!” Which Fabio put into his iPhone immediately and promised to offer next month. Yahoo! (if only I could return…)

After the pasta, he demonstrated gnocchi. “The potato needs to be grinded, not mashed!”  I was a little bummed to see that gnocchi involves (ideally) a stand mixer. Which is not the same as investing $40 in a pasta presser. I have wanted a stand mixer, like, FOREVER, but it always has seemed like too much of an extravagance. Let’s just say it’s on my permanent wish list.

The class was awesome. It was like going to a performance and a great meal and invited into a friend’s kitchen all at once. Y’all, if you are near LA and want a fantastic experience, I really recommend checking out Fabio’s cooking classes.  Follow him on Twitter or watch his blog for announcements. I’m posting a lot of my photos in a slideshow below. You’ll see that his hands are often completely blurred, because they were never still. Total Italian!