Mallomars and the Big Cheese

Today was QUITE a day. Started off with a great workout with my trainer, along with a good buddy of mine, L. She is on a path to health and strength and he welcomed her in to the den of torture good times. No, really, it was all good. I was thrilled to bits to introduce them to each other.  And I had an excellent workout, a little surprising since I almost cancelled last night when I thought I was going to absolutely DIE from lady problems. My body is seriously going through some major, er, transition, and it really put me through the wringer last night. Anyway, I recovered in time to get out to the gym and get a nice sweat on.

After that I ran home, showered, fretted over my wardrobe, threw something on and then ran down to our local WW center for a big Town Hall meeting with none other than the Big Cheese, El Queso Grande, the national CEO of WW, David Kirchhoff! I am normally not all gaga over CEO types but THIS one also happens to be a fantastic blogger. A food and weight loss/health blogger! I love his blog. He’s a great writer and I love the way he explores all these issues. Plus, he Tweets every now and then which is also fun. So I was very excited to meet the guy in person.

When I got there, he was already talking and I kinda snuck in and sat in a back corner. He had a lot of interesting things to say, about health care and obesity, about the Company, about the direction it’s going in, etc etc. He’s also a very compelling, relaxed but energetic speaker. He told a great story about the beginnings of WW, which began with this Queens housewife named Jean Niditch back in the 1960s. I had heard a little bit about her during my training, but I’d never heard…. the Mallomar story!

As he told it, apparently Jean had been overweight her whole life and tried every desperate thing under the sun, none of which worked. And finally she found some medical weight loss clinic which recommended pretty much what WW does today: healthy food, in reasonable amounts. And it sorta worked for her but not really. Because she was eating what they told her, but as it turned out, she was also eating from a stash of Mallomars she kept in her laundry hamper. Heh. 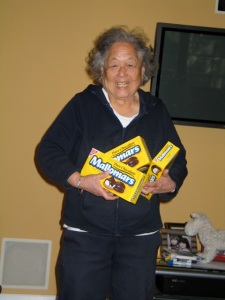 (Warning, detour ahead) I really perked up when he mentioned the word “Mallomars.” These cookies have very sentimental and historical significance in our family. We LOVE Mallomars. In fact I once wrote a poem about my grandmother and Mallomars:

When I grew sophisticated enough

that stale was better.

cracked softly between my teeth,

and the marshmallow inside

was chewy and resilient.

My grandmother paid attention to

she would age the Mallomars

and laying them deep

into a shelf in my father’s cool dusty workroom.

She would mark the date

on the slick plastic package,

under a ball point pen.

at the top of the cellar stairs,

wiping the sawdust away

Well, I’ve learned that you can’t GET Mallomars in most of California. And in fact you can only get them for a few select months out of the year. They’re very seasonal, like Dungeness crab. OK, I digress. Back to Jean. Apparently it was not until she confessed her Mallomar stash to the other “fat ladies” (Jean’s words, not David’s or mine) that she was able to make progress with her weight loss. Ta-daa! Isn’t this just what I wrote about the other day? He mentioned more about the toxic nature (or was it the burden?) of shame, and how the act of coming together and speaking truthfully with these other women was what became the very first WW meeting, and what helped her to lose her weight for good.

Now, I have not known a lot of WW meetings to be super deep and confessional places, although SOME of them are, particularly ones that are led by people who show that example and open it up for members. I would hope that eventually my members will feel comfortable enough to share some of the things that hold them back. I can see how the training materials we get are designed to support people in that way.

Anyway, more stuff was said, including some rather extensive commentary about Valerie Bertinelli (LOL), which I found amusing. Also the great quote that we do not necessarily make bikini models, but we make healthier people. Hooray for that.

And he said that great leaders need to be leading More Meetings, at which point, my boss gave me this Look, and we both cracked up because of all my angsting over balance and more and more and more meetings. But at that moment if Big Cheese had asked me to lead fifty-three meetings a week, I probably would’ve said yes.

OK. This post is getting way long. Here’s the punch line. I had been mulling over, SHOULD I mention anything about blogging? Or my blog? Or the fact that we seem to be Twitterquaintances? And before I could decide, the meeting was over, and he was about to rush off to the airport, and I thought, I better go say something! and lo and behold, HE WALKED up to ME and said, straight off, something to t 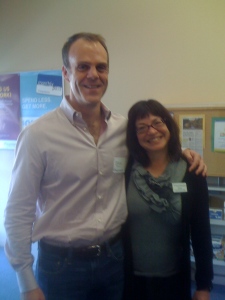 he effect of: “I know you from your blog! It’s a great blog!” I can’t actually remember if he said, “Your blog is great,” or “I like your blog,” or WHAT, but it was something like that.

Let me just say, it made my day. I spluttered and stuttered and who knows what else. And then he said, “You’re a lot more prolific than I am,” to which I said, “Well jeez, you are traveling all the time, it’s incredible you manage to do as much as you do.” And it’s true. His blog posts are so thoughtful, and he includes pictures and links and they’re not just these little throwaways. He thinks about this stuff.

It was a great, great day! Mallomars and the Big Cheese all in one place. And suddenly I got all re-energized.

12 thoughts on “Mallomars and the Big Cheese”