Pumpkin Yum and the Dress Rehearsal 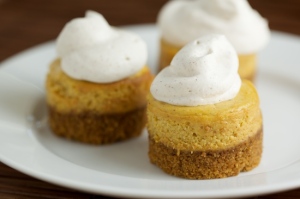 I thought I’d dodged the bullet of Halloween, since my kids are past trick-or-treating age, and we don’t live in a trick-or-treating neighborhood… but then on Saturday, my daughter was bitten by the Baking Bug and she decided she needed to make some mini pumpkin cheesecakes! With cinnamon cream! Aghhhhhh!!!!  So she went ahead and made them. They were adorable. I decided to check out the points of this item using my handy WW online recipe builder (on the WW eTools site). I figured out that each little cheesecake was 5 points. I cut one down into one-point bites (small bites) and shared with some friends. Mmmmmm, that was yummy.

Then I had a pumpkin craving. So I took the extra canned pumpkin that was leftover. I added a box of fat-free, sugar-free vanilla pudding mix. Then I added some fat-free Cool Whip. And…. yum! It was like a pumpkin mousse. It was goooooooood. And I was able to eat a lot more than a teeny tiny bite.

It was a great experiment, and also a great self-demonstration of the options you can choose when you have some high-calorie treat facing you: you can either eat a little bit of it, or you can find ways to “lighten” it so that you can enjoy more volume. I did both this weekend, and both were satisfying, in different ways. Yay. (delicious photo from PinchMySalt.com)

In other news, I did my “dress rehearsal” of my full-on WW meeting today, at a smaller at-work meeting with only my mentor watching. Man, I was nervous. I felt like I was talking a mile a minute, and I was totally overheated (um, sweaty).  After the second page, all my flip chart pages fell on the floor, out of order. Ack. I recovered, but that was not fun. And I had kind of an awkward ending because after I did what I *thought* was my “ending,” someone asked a question, and I answered them, and then I had to end it again, and it just sort of… petered out. Ugh. But OVERALL I think if it was a pass-fail, I would’ve passed, and I guess if it were a letter grade, I’d give myself a… B or B-.

Then tonight, at my regular meeting, my leader did the same topic and I was listening/watching with one ear and eye while working the desk. Wow he’s good. He did touch on the meeting topic, but really he was mixing and matching and really masterfully working with everything the members were saying, and everything just seemed so beautifully orchestrated, and he just is smooooooth. Like he never stumbles. And he’s funny. He’s way funny. His version of the same meeting topic was so very different from what I’d come up with. Which is cool in a way, but also sort of scary. I think I have to think about all the ways that one can address the same issue, and just… breathe, and do my best.

I do think that some of my friends might show up on Thursday to lend some moral support and friendly faces. Which would be so nice.  Again, I know (or I feel pretty confident) that I’m going to PASS, but I want to do more than “pass.” Y’know?

In other OTHER news, I’ve decided to take the month of November off from (gasp) Twitter AND (double gasp) Facebook. Much as I love them both, they are huge time suckers. I’ll still be blogging though, still be emailing and answering the phone and such. So it’s not like I’m going off to some desert island. I will still be HERE and I really hope that people still visit this blog even if I’m not tweeting about it. It will be an interesting experiment.  How many people DO come here through Twitter, and how many come on their own?

8 thoughts on “Pumpkin Yum and the Dress Rehearsal”