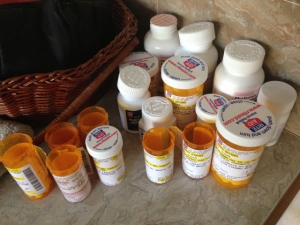 Three times now since this all began, I’ve had wild hopes for various medications that initially feel awesome, and then after 12 or 24 hours, suddenly turn on me with mad ferocity.  The first one was a patch that gave incredible blessed relief for a day or so. It knocked me out and I was able to sleep comfortably for the first time in weeks. I was so grateful. But the next day, I was overcome with vomiting which began a bad spiral of dehydration and misery. Stopped that.

The second one, I was thrilled at first. It seemed to give complete pain control AND I was alert (maybe even a little buzzed/hyper). I thought, wow, I can actually FUNCTION on this one!  Maybe I could even get some stuff done! But by the second day, it had bizarro psychological symptoms that made me feel like a bona fide insane person. I was hysterical, paranoid, fearful and just living some kind of nightmare (and having bad nightmares when I slept, on top of it). That one went into the trash.

This past week, I tried a new medication that came highly recommended from a physician friend for whom it has worked wonders. My neurosurgeon also recommended and wrote me a prescription on Thursday. I tried it out and felt AWESOME on Friday. I was up and about for much longer than my normal tolerance (normal = I can be upright for about 5 minutes before the red hot poker stabbing thing begins, and on Friday I was able to have an entire meal sitting up). I felt great. GREAT. I was so excited.

But then 2am on Saturday morning, the side-effect hell began. Splitting headache. I felt like my eyeballs were going to explode. Nausea. More vomiting. And uncontrollable, out of control weeping. I was, as they say, a hot mess. Despair.

It took all day Saturday and Saturday evening to detox and let that stuff leave my system. Finally today, I am back to baseline. Tired, pain when I get up, but as long as I remain horizontal, I am relatively okay. I took a little field trip to the hospital this morning to get my pre-op testing done (blood, urine, EKG). It wiped me out. But now I am back in my cozy bed, able to eat a little of my favorite toast and yogurt.

I am so ready for this surgery. It’s definitely a go. 3:00pm Wednesday.  If you’re interested in the details: a posterior cervical laminotomy at C5-6 and C6-7. It’s going to be done arthroscopically, which I am uber excited about. A small incision. Just done through a little tube, with microscopic tools. I have utter confidence in the neurosurgeon and I feel like it is the very best option I could have hoped for.

I’m estimating that I have lost about 15-20 lbs of muscle mass since this began. I absolutely CANNOT WAIT to begin my rehab, to start gaining my strength back, to be back in the world. I am hoping that by next week at this time, I will be well started on my way back. I couldn’t be more ready.

7 thoughts on “Side Effects”