One of the things I have loved the most in this past year has been bringing people along on their first official race. Mary joined me in her first 5k at See Jane Run; Sofia joined me in the Color Run (and went on to do her first half marathon and is now training for her first full marathon — WOOHOO!) and this past weekend, my friend Ericka threw her fears to the wind and joined me in the wackiest race of all – the Muddy Buddy. I don’t even remember how this happened; but I think it was via a Facebook post when I thought she was joking about joining me. Ericka has been my workout buddy with our beloved trainer DJ for several years now – we have sweated together plenty, but she has always declared herself “not a runner” and she was content to cheer me on from afar.  I actually have no idea what came over her, but I was so psyched!!

Ericka and I have both had our health battles recently. We celebrated our 50th birthdays, and then I got diabetes and she was hit with Graves disease. Our combined age is 105 (!!!) which put us squarely in the “Women Masters” category for this race. I reminded her that we are in a tiny percentage of 50-year old women with chronic diseases who are participating in athletic events at this level.

I have done a few “fun runs” of 5ks recently, and they truly have been fun for me. But I knew this one was going to be tougher – including off road biking on a mountain bike, likely hills, and those crazy obstacles. If there’s one thing I don’t feel super confident about, it’s my upper arm strength. However, I told Ericka that our aim was to FINISH, and to finish was to win. I really believed that.

We are both writers, and we needed a team name. She came up with “Dirty Wordsters” (haha). I made us matching team shirts (thanks to watching my daughters make dozens of them for their crew team in the past 6 years) and she decorated the bike with dirty words like “filth” and “slime.” We so clever!

Mr. McBody and I picked up Ericka at 5:30am and we drove down to San Jose to this park. Lily’s husband, who grew up there, had already warned me it was “pretty hilly.” Since he was a varsity triathlete at Cal, this was something I took very seriously. Ack. HILLS. Not my favorite.

We got there, jumped around to warm up, visited the PortaPotty, and tried to relax. But I was hecka nervous. I heard the race announcer say that the first mile was “straight uphill.” NICE!

We were in the last wave to start, the “Women Masters.” (ie, the old ladies) I was relieved to see other women our age. It’s not often you go up to other women and ask, “How old are you?” but I did just that and when the other women said “53” I jumped up and gave them high-fives. Yeah baby, we rock. I was feeling pretty fierce and ready.

We moved on up and saw the other waves taking off. We saw some people walking their bikes right from the Start line. I kept saying, I’m gonna walk, I’m gonna walk, but then when I was at the Start and I saw everyone on their bikes, shame took hold of me and I was like, well, I’ll ride, until I can’t. I’m actually glad I did.

The starting horn went off and I got on the bike. I was glad to make it up a few hundred yards before it just got TOO steep. At that point I’d say 90% of the participants were walking, pushing their bikes. Damn that bike was HEAVY. Pretty soon the “runners” were overtaking us (bike members went first, then runners). But they weren’t really running either. Like I said, it was hecka steep. And it went on. And on. I felt like I was eating dust, just heaving for every breath. It went on for a full mile. Just up. And up. And up. It felt pretty darn grim.

At the top of the hill was our first obstacle, and time for me to leave the bike in the “Bike Drop” for my buddy. Of course she had passed me by, walking! We climbed on this spiderwebby thing, up and over. I got a tad bit freaked at the very top, but managed it OK.

Then it was more rolling hills, run, bike, obstacle. Each of us had 3 bike parts and 3 running parts. I was jealous that her first bike was this gorgeous downhill section! But then I got to run that as well.

What can I say? It felt long. It felt really, really hot. We were out in open fields with NOTHING out there but for a dirt trail. But it was okay. There were lots of other people around us – ie, we weren’t being left in the dust – including what seemed to be many younger people (what???). We kept passing the same folks off and on.

The obstacles, which I had been nervous about, weren’t too bad at all. There was a mud tunnel, which I have to say we were very prepared for. We do a lot of low crawling and walking in our trainer workouts. The high things were not so bad. Until the very end (I’ll get to that).

The entire course took us about an hour and a half (OK, exactly an hour and a half)! Which had been my optimistic estimate. I’d looked at other race results and saw that many women our age were coming in between 1:30 and 2:00. So I was hoping for 1:30 at best, and well, whatever it took, as long as we finished.

For the final leg, Ericka was on bike and I was on foot. She had to wait for me for a while because we were supposed to do the final 3 obstacles, including the Mud Pit, together.

Eventually I showed up. We were both pretty tired, but stoked that it was almost over. The first obstacle was a some sort of giant ladder climbing thing. (I think) Not bad. The second one was a rope climb over this blue wooden wall. It didn’t LOOK that bad. I grabbed the rope. Then started to walk up. Hahahaha. The wall was covered in something very slippery — lard? butter? soap?? In any case, we tried and tried and after a few minutes just looked at each other and said, “Uh-uh.” We walked around it.

Then it was time for the infamous MUD PIT. Ooooh boy!! I will say that the cold wet mud felt REALLY GOOD after all that dry dusty heat. We crawled under the flag ropes like a couple of mud puppies. Laughing. 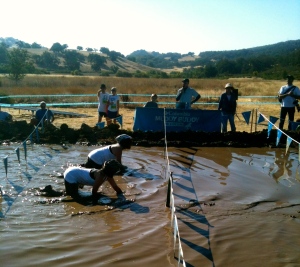 Then we had a little female mud-wrestling moment.

Then clambered out. I don’t think I’ve ever truly understood the word “clamber” until then.

Then we ran through the finish holding hands. Then we got our medals. We were PSYCHED!

Then it was shower (aka garden hose) time. Boy did we need that.

To say that we were filthy was an understatement. But that was the point, right? It was darn hard. It was challenging. We really, really pushed. But in the end I am proud to say that we came in with 43 other teams behind us, most of them younger than we are. That made me feel really good. Not bad for 52 and 53, huh?

So many people asked me, “WHY on earth would you voluntarily sign up for something like that?” And looked even more incredulous when I answered, “Because I’d never done one.” Ha ha, I know, most people haven’t, and have no desire to. But for me, it’s about changing it up, finding new things to do to stay active and most importantly to have fun.

What’s the wackiest, craziest or most fun race you’ve ever done?

I mentioned this to the family and stated that it felt better than my results for Wildflower, where I came in 776 out of 786. That’s right, I was tenth from dead last. While people can say all they want that I was miles or millions ahead of all the people who didn’t do a triathlon at all – still, it feels psychologically different. I know I’ll never WIN a race, and part of me certainly does believe that “finishing is winning” – but damn, I don’t really ever want to come in last. And I don’t like being that close to last, either. I like feeling like I am in the middle of the pack, and if I am just a smidge toward the front, then all the better.

These things are all so silly and arbitrary but at the same time, they DO mean something. Otherwise people wouldn’t be so hot to see their results, and they wouldn’t use computer chips and all kinds of fancy technology to track it all. It does matter to someone. It matters to me.

During (and after) I ran this “little” 5k on Sunday, I felt strong. I felt capable. I felt proud of myself. When I’m struggling with all my might and I’m so close to the end of the pack, it’s just that… a struggle. I have to talk myself into feeling proud. I’m physically beat and NOT feeling strong.

This weekend I vowed to mostly participate in races where I can have that strong feeling. Which means not getting in over my head, or going in undertrained or unprepared. I think it just does more harm than good. I really wish I could do See Jane Tri in September, but darn it, I just found out it’s the same weekend as Fitbloggin, which I can’t miss for anything. So.. maybe another time. And maybe another tri.

What do you think? Does it matter to you what your results are when you run a race, or are you truly just in it for fun? Do you even LOOK at your results?

Okay, so I must be feeling better. I’m making up my wish list of active events for the coming year. And: I would LOVE COMPANY at any of these!!!!!! Tell me if you want to join in! Remember, the “company” is for before/after shmoozing. I go at my own pace which may be much slower or faster (<<ha ha unlikely!) than another person. But I love sharing events with people and especially reading race or event recaps where I shared the same experience.