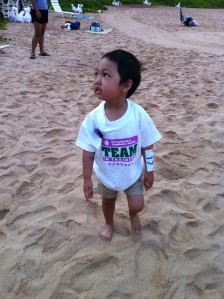 One of the reasons we train with Team in Training is also to support the Leukemia & Lymphoma Society. When I did my TNT marathon back in 2000, we met our honoree once I think. But I didn’t really feel a personal connection. This time it feels really different. Our team honoree is Izzy, the most adorable 3 year old EVER. Her parents are both training on our team as well. Her dad is one of the team captains and is leading many of the workouts. Her mom is also training for the triathlon. I met Izzy at our team kick-off last week and she just melted my heart.

Here’s a little bit about her (supplied by her mom).

June 29th marked Izzy’s one year cancer remission birthday.  She is currently in her maintenance phase of treatment which consists of oral chemo everyday, steroid 5days out of the month, a dose of vincrisintin (chemo) once a month through her broviac (a central line port), and inter-thecal chemo every three months.  Thankfully she is halfway through her treatment and has a little over a year left.  She just started ballet and tap class, loves anything Disney princess, and her favorite place is the zoo.

So this is one of the reasons that I am going to continue hounding y’all who have not yet donated to my fundraising efforts. If you are reading this and have not yet donated, please do. Give a little or a lot, whatever you are able. If you are local, I invite you to the fabulous Cocktail and Cupcake party I’m throwing next week. (I’m bartending) If you can’t make it, no problem – just visit my fundraising page! Easy peasy!

I have several other honorees that I’m training for (and in memory of) and I’ll be telling you more about them as the season progresses. If YOU have someone in your life who has (or did have) any form of blood cancer, and you’d like me to add their to my hat, please let me know. I’d be honored to honor them. 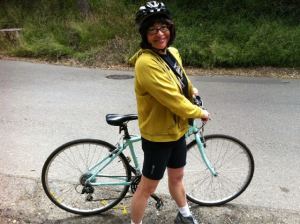 Today is officially the start of my 2nd week of triathlon training. I did my second “big” team training this morning, and after a nice nap, I’m ready to do some recapping.

Part of me can’t believe I’m actually doing this.

Part of me thinks it’s not so bad.

Today we did an hour long swim including drills and freestyle laps (some/most of the drills are harder than “just” swimming!) up in Novato, which is about an hour away. Which means I got up at 6am, met my carpool buddies at 7 and then drove up to the workout. I was actually feeling encouraged that I think my swimming form and stamina have both improved over the week. I can really feel a difference from just a week ago! So yay on that.

Then we did a bunch of dynamic warmups before running. The running part was a big loop on a wooded trail. It was awesome to be outside in the woods and hills instead of on a track. They said the trail loop was a little less than 2 miles long. They said that people doing the Sprint distance or people in the “developing” level of the Olympic distance should do one loop. It included one semi-mild hill and then one crazy, steep insane hill. Which they recommended walking. Hahahaha. (as if!)  So I finished the first loop and was like, yeah! DONE! But the coaches at the water station were like, “Are you doing it again?” And I sort of did a double take. They pointed to my hat (Oakland Running Festival) and my T-shirt (Las Vegas Marathon) and said if I was going to wear stuff like that, I better be going twice. Gulp. So I took off for the second lap.

Not totally surprisingly, the 2nd lap felt MUCH better than the first one did. I really do need a significant warmup! and the first loop was much more of a struggle than the second one. After the second loop, we had been at it for three hours. Then they took us over to a field to do a bunch of core work.

Then I was tired.

I didn’t recap my first “official” bike workout yesterday. I was supposed to do an OYO (on your own) 30 minute ride. Mr. McBody took me to a little trail that goes down to our neighborhood town/village. It’s kind of a mild downhill. I was happy because I thought it would be a perfect way to practice hills, in a protected way.

It was a good challenge and it was not easy. At all. The trail was filled with walkers and dogs and little kids on trikes and strollers and just all kinds of obstacles. Each one put a little splinter of terror into my heart. I had to practice my slowing down and shifting gears and such. Which I did not enjoy. At the bottom of the hill there was a hairpin turn that went downhill and I just couldn’t do it. It terrified me.

I don’t like the machinery of the bike. There’s too much stuff.  It’s dangerous feeling. Once when I was getting on (or off) the gears “bit” me in th leg. Which hurt.

It just makes me feel so unskilled and also at the mercy of this piece of equipment. I can see now that this part of the tri is going to be my most challenging. I hope that as we do more team bike workouts, I will get more tips and feel more comfortable.