I promise I’m not going to present you a lengthy recap after every single tri workout, but today was the first. So you’re gonna get a lengthy one today. It was just… wow. Wow hard, wow good, wow scary, wow humbling, just wow.

Our little triathlon team is about 18 people in the SF Bay Area. Today we traveled out to a middle school in Pleasant Hill, about 30 miles from where I live, for our first combo swim/run workout.

First the swim coach gave us a demo of what our swim stroke is supposed to look like: head down, body aligned, blowing out bubbles at all times, and what she called the “catch-up Michael Phelps” stroke. So the “base” of the stroke is that you’ve got both arms extended straight out, arms at ears, and the hands are actually sort of crossed over one another. Then you remove one arm to come down and stroke and immediately return it to that position, and then you do the other side.

She asked us to position ourselves based on our own level of experience and I headed to the most “developing” (ie beginner) lane. Which turned out to be exactly where I needed to be. This was not a surprise or particularly devastating since I have, as I said before, not swum laps in 18 years. 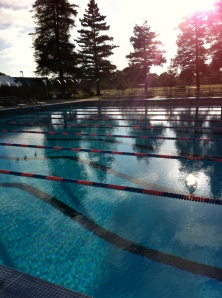 So we get in, and there are 2 other women in my lane, and our coach (there was one coach for every 2-3 lanes) said, “Just go back and forth.” Um o-kay. I took off from the wall trying to be all Michael Phelpsish. We went back and forth a bunch of times. I was happy that my goggles are AWESOME (they aren’t prescription but they have corrective lenses and I could actually SEE clearly). By the 4th length I was panting. Way pooped. I was somewhat relieved to see that my lanemates were also short on the oxygen.

Then we did a bunch of drills during which we did lengths where we only kicked (no stroking) – that was hard, and some where we had our arms down by our sides (that was hard too!). Then we did 4 LAPS (back and forth) and then we did 4 LENGTHS. Um, dude, that’s a lot of swimming. I found myself getting ridiculously thirsty and thank goodness I had my water bottle at the side of the pool. One of my knees also complained a bit. But at the end of an hour (an hour!!) I felt like I was almost starting to get the hang of it. I was tired, but I also felt like I could’ve gone on.

But then it was time to run. We went into the girls’ locker room to change and it was a bit of a challenge putting running clothes (ie sports bra) on a somewhat wet body. Whatever. We went out to the track and did a bit of dynamic warmups – skipping, knee-ups, lunges, grapevines, basketball side running things and the like. Whew! That was pretty tiring.

Then we were to do 4 laps around the track (1/4 mile each) BUT we were supposed to “stride” (pick up the pace) during the straightaways. Which is about half of it. Intervals! Brutal intervals. They made me feel kind of pukey. But I did it. Then when we finished that, he said, “OK, now you’re going to do a timed mile.” They had given some sort of lip service to this notion of run-walking, but believe me I think about 90% of this team was RUNNING. And I mean running. Like 7-8 minute miles kind of running.

It was clear that my leisurely little jogging/wogging pace was going to put me flat at the end. Where I did not want to be. I discussed this with Mr M before leaving today. In most of my timed races I find myself around the final 1/3 of the crowd. Which is just fine. But this is a very fast, young crowd.

I tried very hard to stay focused. To keep my own pace. To not worry that I was getting lapped by the younguns. I just tried to keep my head up and keep running. But MAN. It was humbling. They did say we might want to “kick it out” for the final straightaway and I did just that. I kept at my slowish pace until the very end and then I sprinted in, punch in the gut style.

My time for the mile was 11:30.  Now I know that for many of you young runners out there, that is glacially slow. But people, I have not run an entire mile at that pace, like EVER. I’ve been averaging (according to Runkeeper) around 13-14 minute miles. So do do this mile sub-12 to me was totally incredible. But at the same time, I felt it. And I was third to last in the team. (I think. Maybe 4th. I didn’t really look behind me)

It was sobering. It was humbling. It was kind of exciting to know that I was running with the big dogs (actually, the young dogs) and sort of holding my own. But it also showed me that this is going to be no walk in the park. This workout (3 hours total) was NO JOKE.

After the workout a group of us went to a nearby cafe for brunch (we were finished at 11am!). I was in a bit of a stunned state. Part of me was like, OMG WTF did I get myself INTO? And part of me was like Go Ito, you did this. You didn’t drown or fall down or anything traumatic. You kept up. You stayed in the range.

I’m excited. And I’m also a bit in state of shock.

The other part of this, of course, is fundraising for the Leukemia & Lymphoma Society. I have a bunch of really, really fun events planned locally. I’m going to be guest bartender at a local bistro on August 11th and they’re donating a generous percentage to my fund! (any and all invited!) Other fun things are in the works. Stay tuned, and if you can’t make a local event, please please please consider giving a little or a lot here.

And So It Begins: Triathlon Training

This morning I attended the “winter season” kickoff for Team in Training. It was a festive event with hundreds of people who are all training for upcoming endurance events. When I scanned the room, at first I felt reassured because I saw people of all Ages and Sizes. But then I realized that the vast majority of people who were my age (or older) or my size (or larger) were pretty much concentrated on the Walk or Hike Teams. When I made my way over to the Triathlon area, I saw a bunch of fit young people, many of whom were young enough to be my children. Big swallow.

I spent a good part of the afternoon at Sports Basement, for which I had a 20% discount coupon (which ended up really really helping).  New running shoes (mine are a good 3 years old and pretty beat up), padded bike shorts, optical goggles so I don’t end up swimming through the Golden Gate, and a new swimsuit. They told us to try on our swimsuits, lean forward in front of a mirror and make sure nothing “falls out.” (LOL)

Looking in the mirror in the store, I thought, “I feel like a Before.” I wonder what these next four months hold in store for me. I wonder what After will feel like.

Starting tomorrow, I will be working out six days a week. (I think this counts as “doing something,” right, Kris?) I am both ready and ready. Terrified and excited. Confident and insecure. Feeling completely crazy. I just got a text from one of my carpool buddies. I am to be at her house at 7:10.

I better start sorting out that gear.