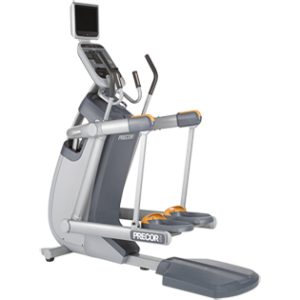 I went to the gym early again today. It is getting easier! For real! (I’m shocked) It feels a little bit like traveling to another time zone: at first it totally sucks. I can barely even deal with Daylight Savings. But eventually, you get used to it, your body adjusts and it’s all okay.

The first day I got up at 5:30 and went to the gym, I felt so bleary and just pretty nonfunctional. Yeah, I got a few nice endorphins but they could not combat the total brain-fuzz that happened. And by dinnertime I was passing out.

But the next day was easier. And the next one. And by today I even woke up BEFORE my alarm and it was all good. I got to the gym and headed straight for my favorite machine, the AMT (Adaptive Motion Trainer).  I know, it looks sorta like an elliptical, but it’s SO NOT. It’s just way beyond it. You glide on those pedals and sometimes they’re stairs, going up and down, and sometimes they’re looong striders. It’s all sort of intuitive and well it’s an INCREDIBLE workout – I was absolutely drenched in rivers of sweat – but I never got sore. It’s like zero impact. I traveled over 6 miles in an hour on this thing, and you know if I’d have done the same thing running I’d be one hurting puppy. When the hour was up, I climbed off very reluctantly. I could’ve stayed on it all day. One day I’d like to do a little marathon for myself and see just how long I can go at one stretch. I know I hadn’t reached my limit.  I started thinking, oh how nice it would be to have one of these at home! But with a price tag of $8,000, I think I’m gonna keep renting it by the hour at the gym.

This week has taught me truly never say Never. It it kind of shocking to me, various things I’m doing now that I have said I’d never ever do:

So just shows how much I know. I know now to never say never.